They are still sweet and playful: The Rottweiler puppies Amigo, Anton and Antonia are the offspring of the Duisburger Service Dog Squadron.

Duisburg. Rottweiler puppy Amigo wants to become a service dog when he grows up. Henrik Richter, his owner, trains with him every day.

Amigo and Antonia are still toddling around the yard and are being cuddled on their belly with tail wagging. Hard to imagine that the three-month-old Rottweiler puppies will soon be weighing around 50 kilos, sniffing drugs and facing criminals. "Then they won't look so cute anymore," jokes service dog trainer Henrik Richter. Until they are real tracker noses, they must not only grow, but also complete a police dog training. 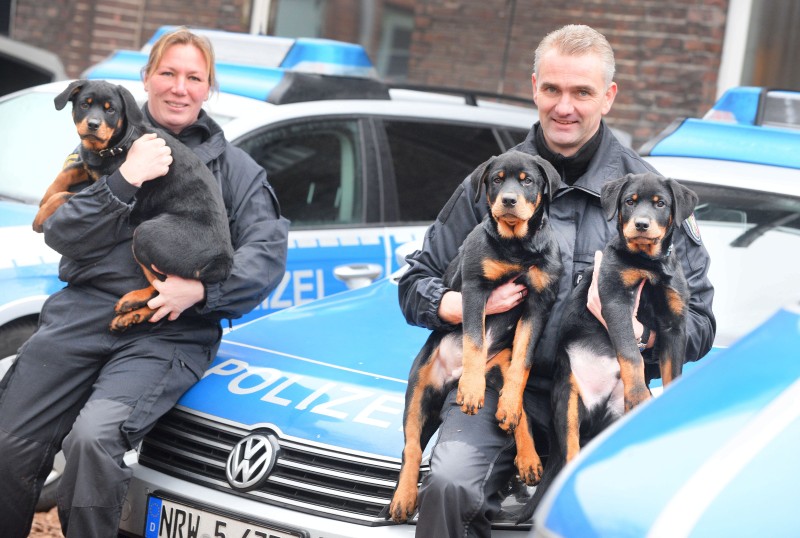 Since this week Amigo is an official police training dog. It still takes a while until Antonia is allowed to start her service. His owner Iris Spieß still has a seven-year-old Malinois who goes on a manhunt with her. "Until he retires, Antonia remains my private dog," explains the 41-year-old. Amigo is currently the only puppy in training at the Duisburg Dog Squadron.

The dog child continues his police career in the third generation. "His grandfather Festus was my first service dog, his father Quintus my second - he died in 2016", says Henrik Richter, who bred for the second time. Nine puppies were born, three of them stay in Duisburg and are gradually trained as police dogs, four more went to private persons. One of the siblings came to Salzburg for the service dog squadron. "Anton, another puppy, becomes my private dog", says Richter.

Delicacies for the good puppies. 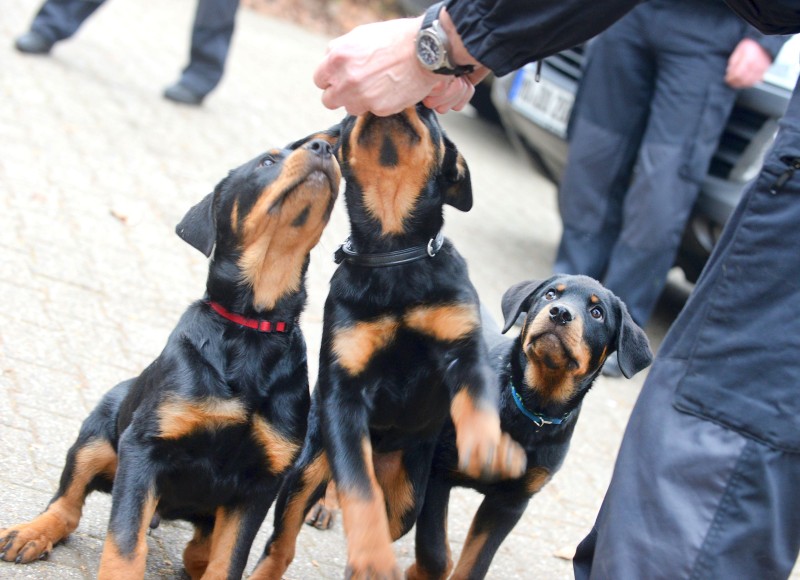 At the moment Amigo is learning to become "environmentally safe". In case of emergency he has to be fierce to be able to face criminals, but at the same time he has to be a loving family dog. "That's why he should experience all he can during the imprinting phase," explains the 46-year-old. "We walk a lot, for example to the train station, drive escalators and elevators, meet many different people and dogs."

Positive conditioned with clicker and treats

The male dog has already learned some commands. "Here" is one of the most important commands, "so that he comes fast to me." For this Henrik Richter works with a clicker and treats as a reward. "With it he is conditioned positively. In the end Amigo is allowed to call himself a person and drug tracker dog - just like father Quintus. After all, the service dogs must take a test every two to three months during the training, in which the abilities and the nature of the animal are tested. How long the training lasts depends on the speed of the individual dog. After the test, Richter must continue to train with him "so that he is safe when he comes into stress situations later". Amigo will then be about one year old before he starts his first "blue light ride".

Assignments are for everyone hard work

The operations are also hard work for the cops on four paws. Like finding drugs in the summer. "20 to 30 minutes they can be under in the heat, otherwise it becomes too exhausting." All the nicer it is for humans and animals, if for instance a burglar is caught or a missing person is tracked down. "Such success experiences need also the dog. Amigo and Antonia don't know anything about this yet. They prefer to give the visitors their belly - and use their fiercest weapon: The puppy look.

13 Sniffing noses in the dog squadron

A total of 13 dog leaders with just as many service dogs work for the dog squadron in Duisburg. The animals belong to the state of NRW, which also bears the costs for veterinarian and food. Amigo, Antonia and their siblings were born on 12 October 2016 under the breeding name "Vom Isenbügeler Kopf". 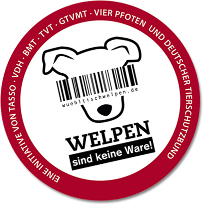